Much has been dreamed about the potential of the Battery Street Tunnel – which would soon be decommissioned and turned into a rubble grave from the soon-to-be-demolished Alaskan Way Viaduct. A community effort last year called Recharge the Battery envisioned reusing the tunnel for everything from a mushroom farm to a bike path.

Unfortunately, his fate is pretty much sealed. However, local architecture firm Miller Hull Partnership is still envisioning a nicer result that puts more people first – though they still acknowledge that it is unlikely to become a reality – and bringing that sensibility to all of downtown.

“The Right Way: Taking Back Seattle’s Right of Ways” describes a tree-lined dream for downtown pedestrian corridors that flips a design that has evolved from a strategy with the first car to something brimming with the biodiversity of the Pacific Northwest Green belt has emerged, salmon runs and pollinating plants.

Currently, the vision involves two major canyons: a Battery Street stretch that spans the tunnel and another that flows down University Street, filtering rainwater from Denny Park and Freeway Park to Elliott Bay. Heavily laid out streets form connective tissue for the network in the city center.

The future of Battery Street is envisioned as a tree-lined network of creeks and paths that bring down the current ceiling support beams and grill them into vertical supports that are entwined with tall trees. Pedestrian walkways float above water collection infrastructure, creating a diverse public community that also helps combat the effects of a car-heavy reality. 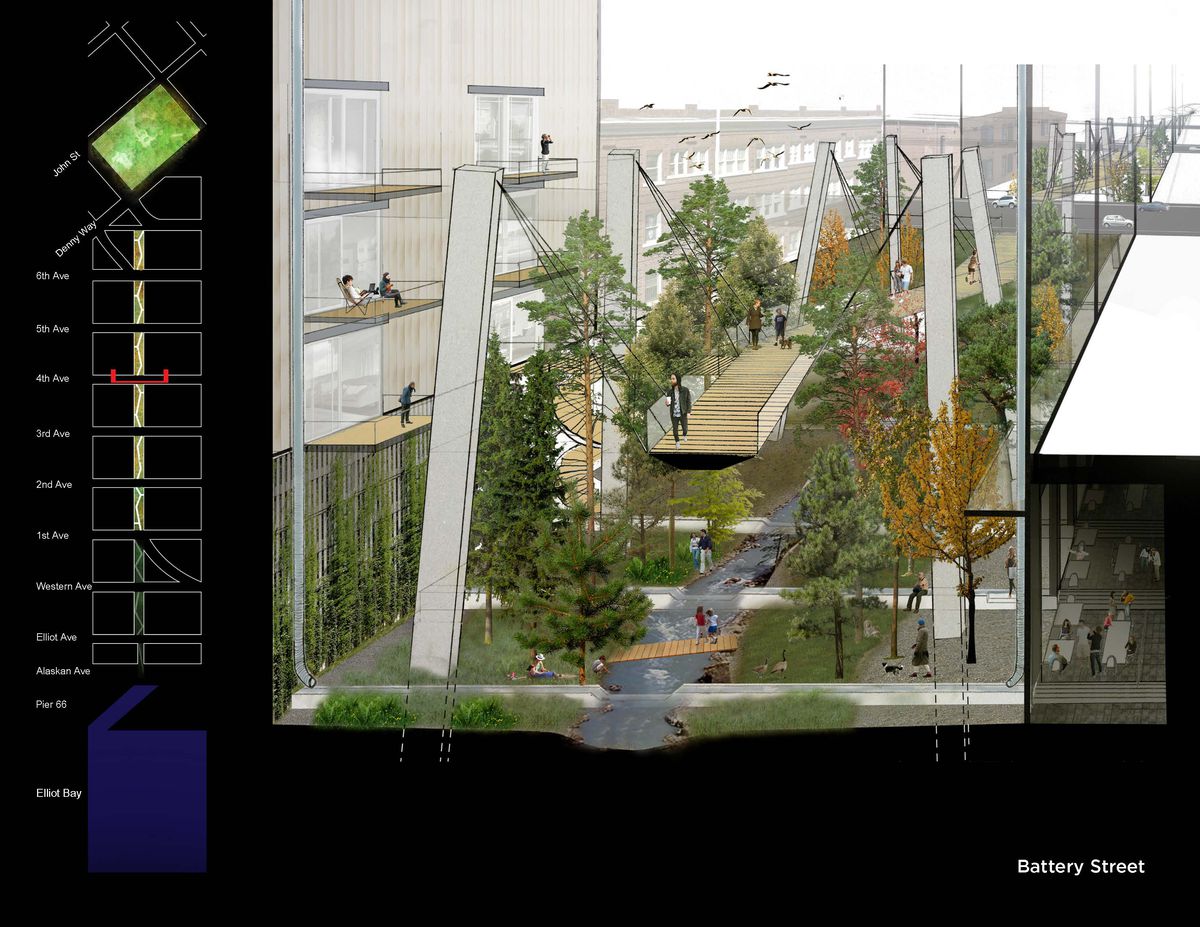 The vision is similar for University Street: a canyon flows from Freeway Park to the boardwalk, providing a path for people, birds and fish. Not only does the water provide a thoroughfare for aquatic life, but it also helps mask traffic noise as the rest of the habitat filters the air.

The University’s corridor is made up of three main parts: a terrace pond flowing down from the park and a stream that runs through the center of the gorge past the Rainier Tower and ends in a waterfall past Hammering Man and down the Harbor Steps.

While the ship has largely made the Battery Street sailing route a reality – a Miller Hull spokesperson called it “more of an idea project” – and the University Street Gorge is a pretty big dream, it’s an expansive take on a shared vision of streets.

“The greatest potential of right of way lies in the fact that we can all own this space and redefine the current city’s priorities,” concludes a statement by Miller Hull. “Our public roads have to work and function in different ways.”

What Happens When Seattle Shakes? – Slog

Coronavirus daily news updates, January 11: What to know today about...