Learning | Research | UW and the community

Jeffrey Karl Ochsner is Professor of Architecture at the University of Washington and Assistant Dean of Academic Affairs at the College of Built Environments. He edited both editions of Shaping Seattle Architecture: A Historic Guide for Architects. Ochsner answered a few questions to UW Today.

Q: The 1994 publication of Shaping Seattle Architecture marked the 100th anniversary of the American Institute of Architects in Seattle. What was the reason for a second edition now, 20 years later?

A: The 1994 edition was reprinted in 1998 but has been out of print since around 2006. It would have been possible to reprint it, but since 1994 there has been 20 years of new research that the editors and I wanted to include. In addition, in the two decades since the first edition, we gained more historical perspectives for the second half of the 20th century and wanted to include more architects who contributed to the built environment in Seattle during that time. We also wanted to include updates and new illustrations in some of the 1994 essays.

A: Working with UW Press, we’ve found that we can include some additional essays as well as updates to the 48 essays in the previous book. The editorial team and I spent a long time discussing who to include.

In the 1994 edition, we included Edwin Ivey in Elizabeth Ayer’s essay. In this issue, Ivey gets his own essay, which also allows us to include more of Ayer’s later work. Fred Bassetti was still active in 1994 but when he retired from training we felt we had to involve him because he was so important. 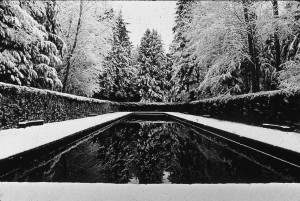 The reflection pool in Bloedel Reserve on Bainbridge Island, designed by Richard Haag, one of the Northwest Architects, added to the second edition of “Shaping Seattle Architecture”. The book is published by the University of Washington Press.Mary Randlett / UW Press

A similar case was Rich Haag – as the founder of the UW landscape architecture program and a key figure in the development of landscape architecture in this region. And Jane Hastings was a leading figure, a successful practitioner who has received numerous awards and also served as Chancellor of the College of Fellows at the American Institute of Architects.

Q: Also new in the second edition is an article on architects and suburban houses before and after World War II. How differently does an architect work in creating a design that is repeated many times in subdivisions?

A: The 1994 edition tended to emphasize the role architects played in creating custom designs for individual clients. Architects, however, also played a role in the design of the so-called “production house” – designs that are repeated with variations in single-family homes.

Often times, these designs are created with the specific needs of the developer in mind and can be offered as prototypes that are examples of the types of houses a developer might want to build. Readers will be surprised how many different architects in Seattle have worked with developers or builders at some point in their careers who have designed this type of living space.

Q: The book has an extensive reference section on the back. What does this section cover and how has it been updated since 1994?

A: The editorial team and I felt that updating the Appendices was especially important in order to keep the book useful for reference. More changes have been made there than in any other part of the book. The “sources of information” for each of the architects now include publications that have appeared in the past 20 years. The address lists have been corrected and updated (including the removal of destroyed buildings).

The biggest changes are in short entries for “additional architects” that have been significant in Seattle history: in 1994 we added about 85 additional architects – now we have more than 250, including many who were in the second half of the 20th century Century practiced. Finally, David Rash’s appendix entitled “Researching Seattle’s Architectural Past” has been completely updated with digital resources added.

One thing that may not be immediately apparent is the number of architects involved who have UW connections. With the extension of the “Additional Architects” appendix, a very long list of UW faculties and graduates has been added.

Q: What lessons could a reader learn from this book about changing architecture and design?

A: The editorial team and I wanted to show the variety of architectural achievements and the extraordinary diversity of those that have helped create the built environment in Seattle. The book contains over 600 photographs and really shows a wide range of what the architects of Seattle have done.