Get access to the full spreadsheets used to create the charts in this and other posts, as well as a number of additional insider perks by becoming a member of Seattle Bubble.

The NWMLS released their August statistics yesterday. So let’s take a look at how the month has done for the property market.

As we mentioned in yesterday’s preview post, the biggest story is a sudden, renewed shortage of inventory.

Before we dive into our detailed monthly statistics, check out the press release here.

Exhausted inventory continues to frustrate potential buyers in West Washington. Many of these potential homeowners are expanding their searches beyond the major King County’s job centers, according to market watchers who commented on the latest statistics from the Northwest Multiple Listing Service.
…
“While August is always a slower time for listings and sales, this year it’s really surprising that fewer new listings have been added while pending sales have increased,” noted Mike Grady, president and COO of Coldwell Banker Bain.
…
According to Wilson, multiple offers are still the order of the day and many buyers leave disappointed. “With open houses, traffic is heavy and our average market time for houses with correct prices is still very short,” he added.

“The August numbers offered some interesting nuggets,” said OB Jacobi, President of Windermere Real Estate. “The Seattle real estate market is still at the ‘sugar high’ we saw last summer, but property sales and prices are stabilizing, reassuring both buyers and sellers.”

Brief note: According to Redfin, several offers are currently far from being “everyday”. As of August, fewer than 10 percent of listings in the Seattle area were competitive. (Disclosure: Tim works for Redfin.)

However, new entries are in fact way down. Let’s get to the data to quantify the drop.

Here is your King County SFH round-up with the arrows showing whether the direction of each indicator is favorable or unfavorable year-over-year for buyers and sellers (green = cheap, red = unfavorable):

Here is the inventory graph with the same graph overlaid every year.

Inventories fell five percent from July to August. In the same period last year, inventories rose by 12 percent. The 10 percent year-over-year decrease in inventory levels is the biggest decrease since January 2018.

Here is the table of new offers: 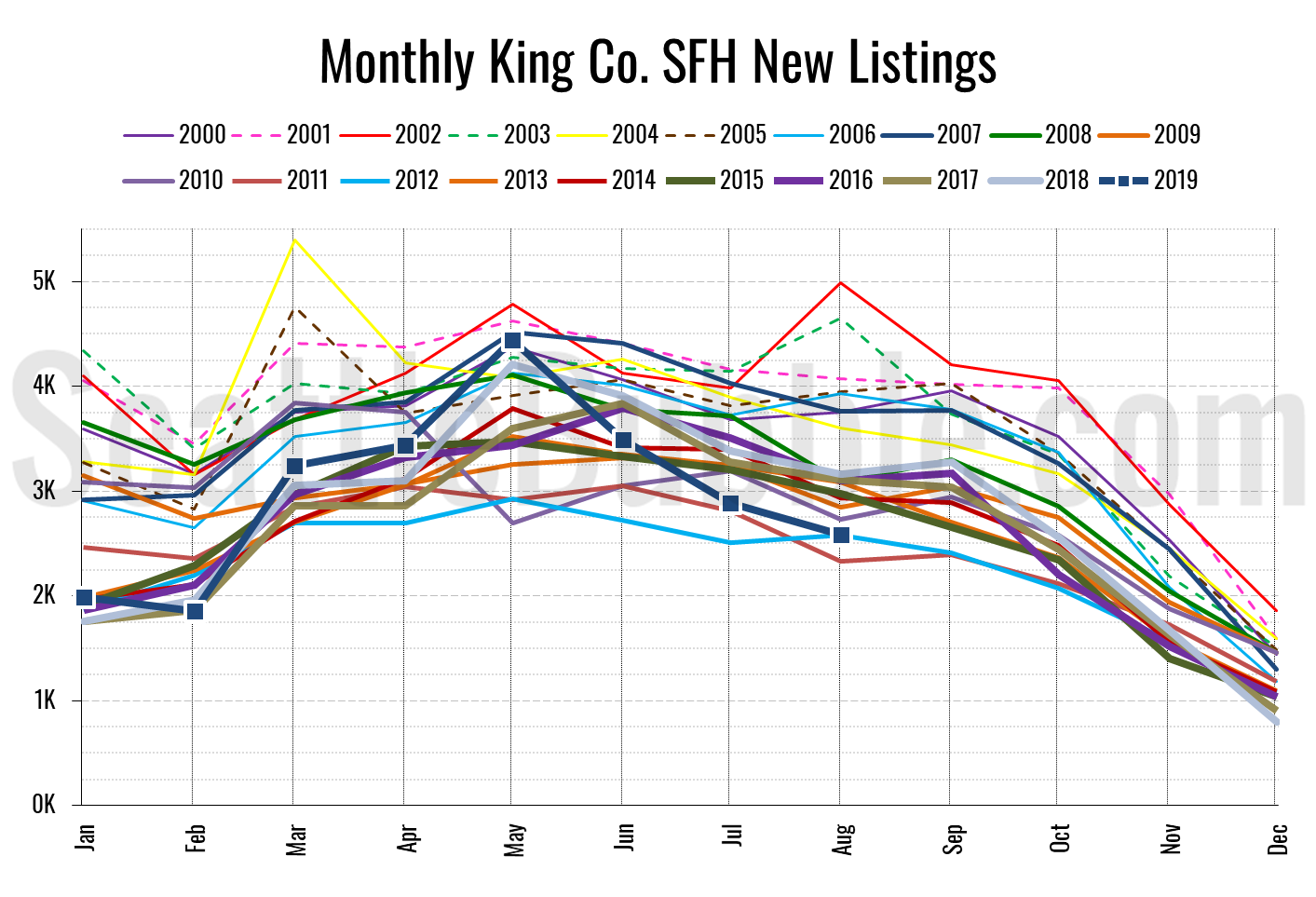 New registrations fell from July to August by 10 percent and compared to the previous year by 18 percent. Only in 2011 and 2012 there were fewer new offers in August than in 2019.

Here is your yearly comparison table for closed sales: 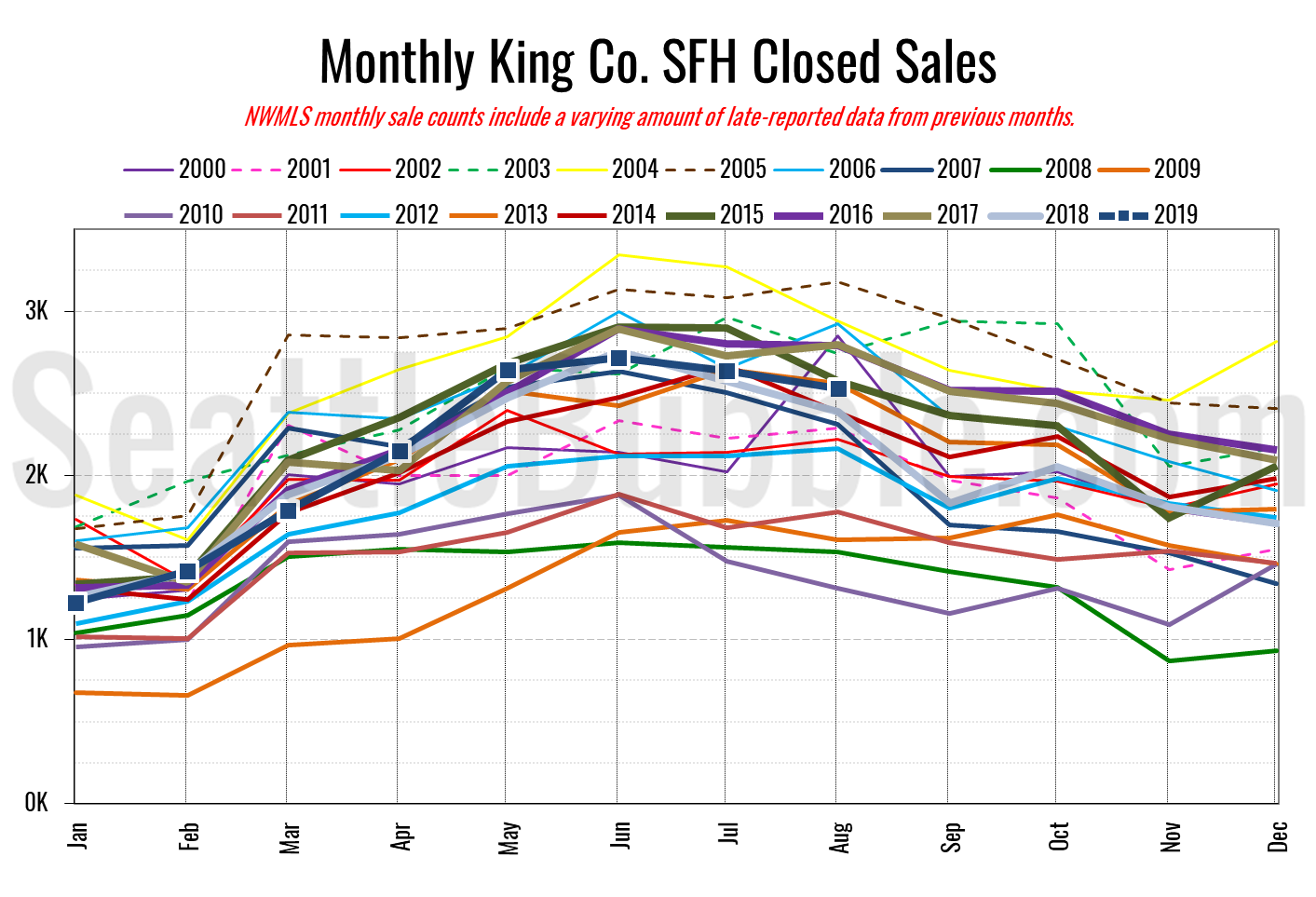 Closed sales fell four percent between July and August and increased six percent over the previous year. Closed sales have been in a fairly narrow range of around 2,400-2,800 each August since 2013, and this year it fell right in the middle of that range at 2,531. 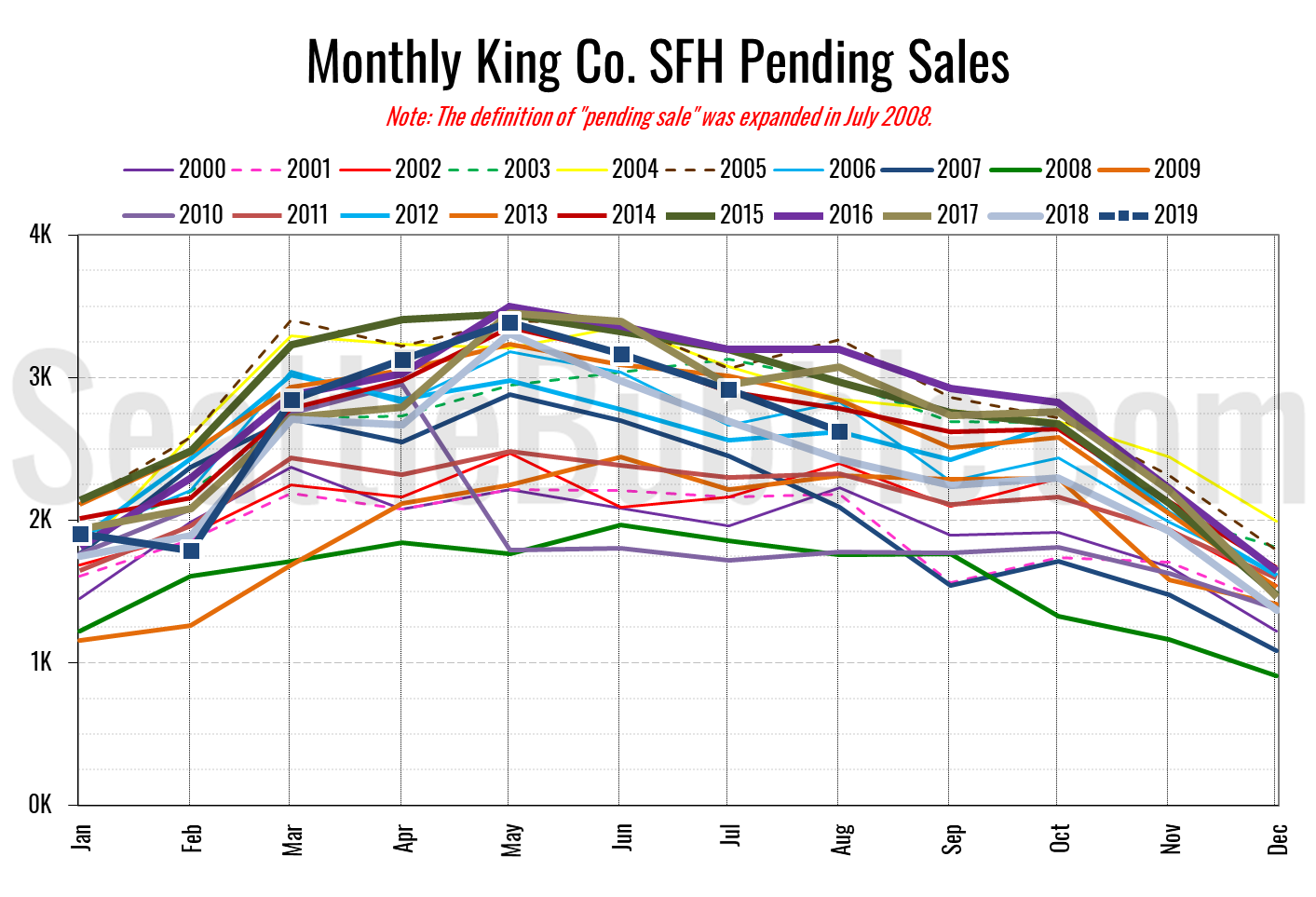 Outstanding sales were down 10 percent month-over-month, but increased 8 percent year over year.

Here is the YOY supply / demand chart. “Demand” in this graph is represented by closed sales that had a consistent definition throughout the decade (as opposed to pending sales by NWMLS). 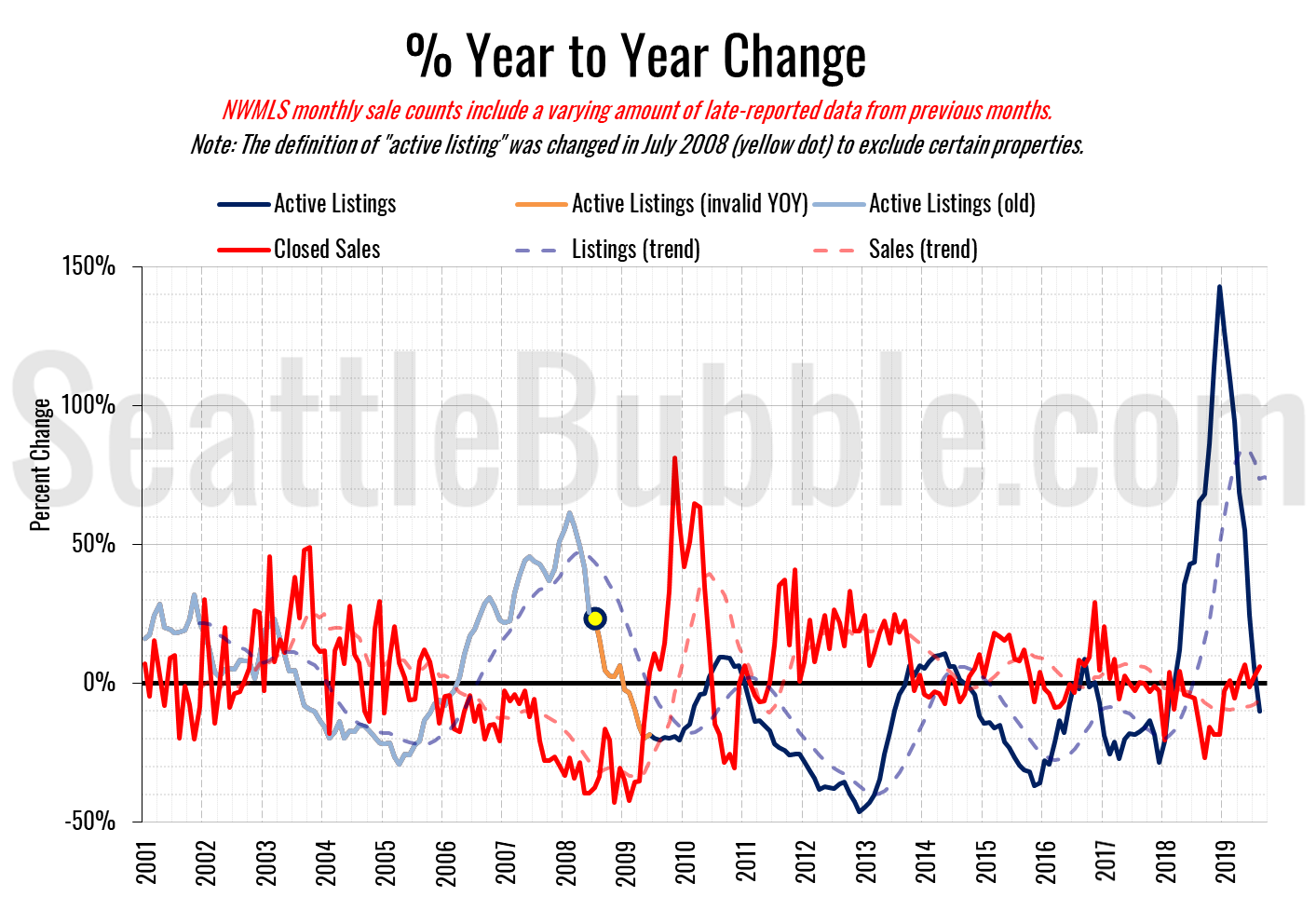 The good news for buyers regarding the housing supply was short-lived. Supply is back in the red.

Here is the mean change graph for home price: 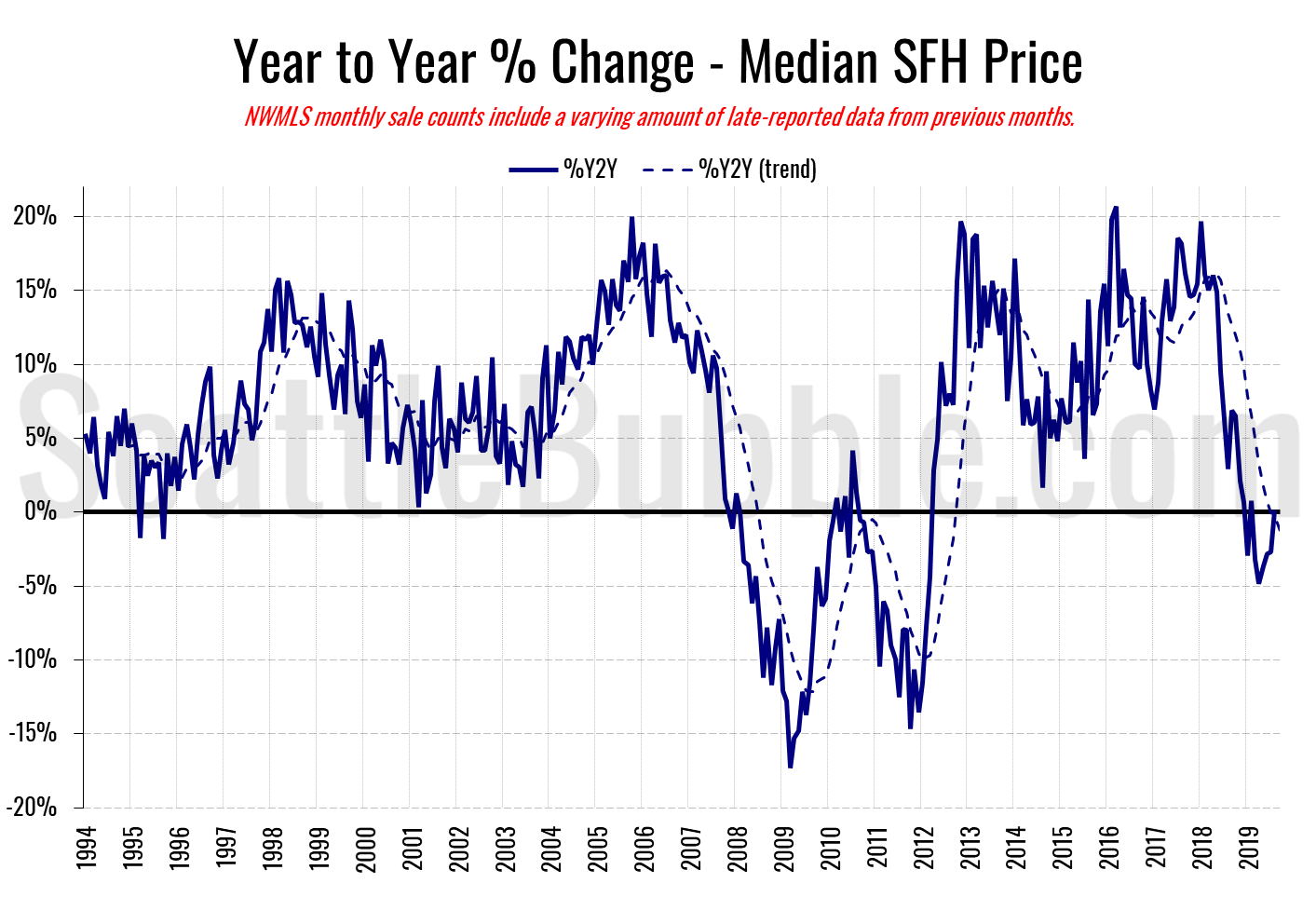 Property prices fell a bit last month, but not as much as last year at this time, so we only just ended up in the black year-on-year.

And finally, here is the graph comparing King County’s monthly SFH prices for each year through 1994 (not adjusted for inflation). 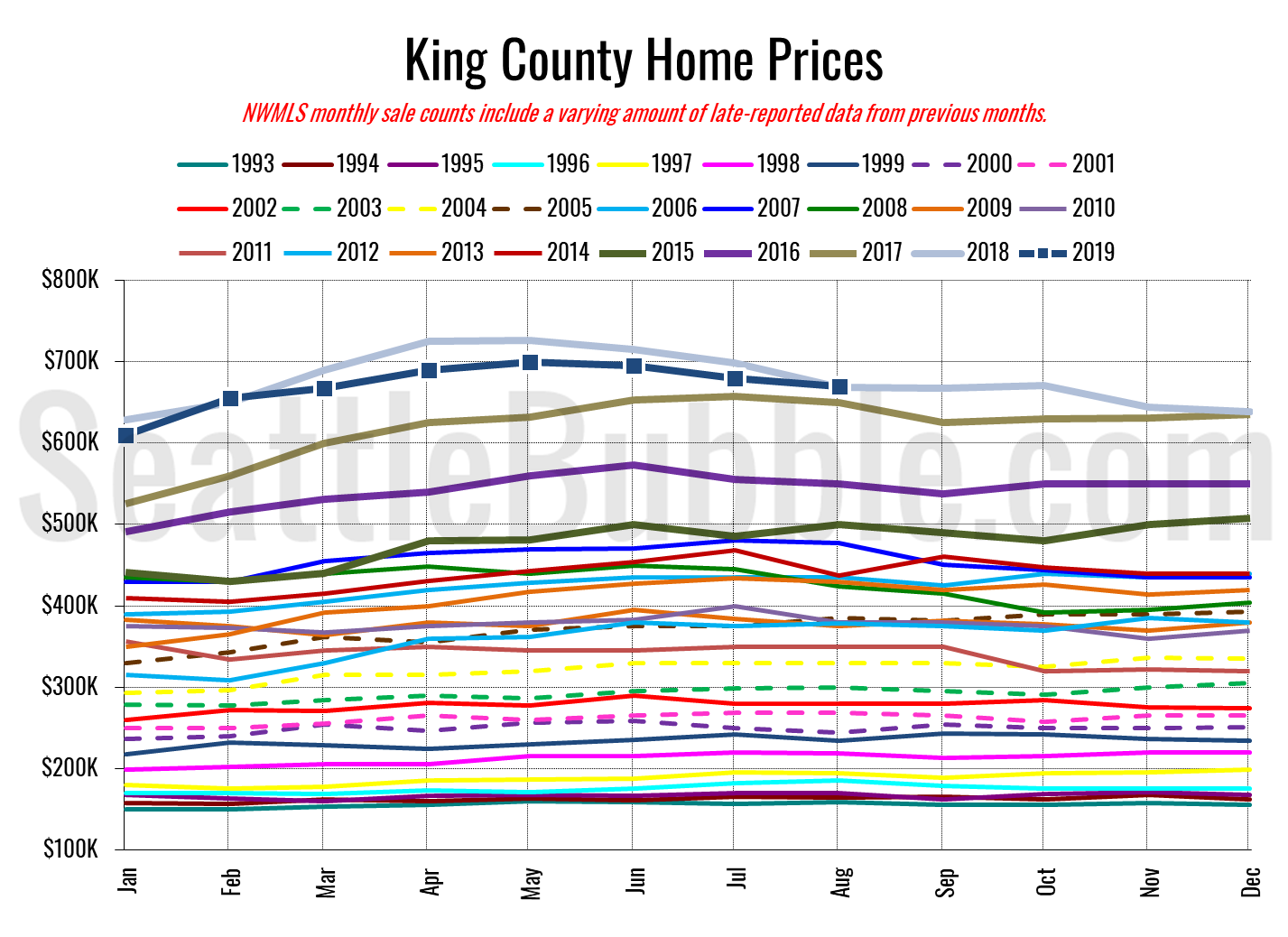 Here’s the Seattle Times article about those numbers: The market is relaxed, but Seattle property prices are still too high for many first-time buyers

West Seattle Blog… | FYI: Your federal ‘check’ might arrive as...

What ‘Sleepless in Seattle’ gets right/wrong about Seattle