Every year for the past 25 years, the Sheraton has brought the Seattle architectural community together to work with some non-traditional materials: candy, fondant, and of course, gingerbread cookies.

And these are not the tiny table creations from your youth. These houses are massive, with elaborate mechanical elements, integrated lighting displays and internal scaffolding.

“It’s bigger every year,” 4D Architects principal and designer Ben Mulder told Curbed Seattle as he put the finishing touches to his creation: an ultra-futuristic vision of Pioneer Square and Sodo, equally based in Seattle, Dubai and Atlantis is made up.

“It’s a different way of being creative,” Mulder explained. “In my job, I have to be an adult and follow all kinds of rules every day [like zoning and client wishes]… there are very few rules here. I just have to make sure it fits out the door. “

That year architects were told to shape Seattle’s past or future. All future designs, including 4Ds, have one thing in common: We are underwater. Some creations are more extreme, like MG2’s design with tuber jellyfish under the surface dwarfing an underwater pull. Another by Mackenzie envisions a completely submerged scenario in which the Space Needle is submerged and surrounded by corals from Froot Loops and Cheetos.

Nevertheless, 4D designs the new environment, including a small second in which Bertha digs under the sea. The candy cutterhead even spins thanks to a disco ball motor Mulder said cost about $ 10. (“Contrary to this one, this one works,” someone called off as we spoke.)

Above, some well-known structures are built mostly out of gingerbread: Smith Tower, King Street Station. But new structures, made up mostly of melted and molded isomalt – a sugar substitute made from beets – rise even further and take on curvaceous shapes inspired by both the past and Mulder’s imagination.

“That’s exactly the whole point, is the dark kind of wavy gingerbread that’s not perfect, and then balances it out with this modern, high-tech LED-lit stuff,” Mulder explained.

Next to the Smith Tower is a futuristic rendering of what was once Seattle’s tallest skyscraper. Another, facing the water, takes inspiration from the bow of a boat. One tall spinning building stands out among the newer buildings, however: Mulder said it was a high-rise apartment building that would make a pretty penny because “you can sell all of the units as a view of the water.” (It was only after he designed the structure that Mulder learned that the idea was already in the works.)

4D also shares a similar future vision as many Sonics fans: In this future, Chris Hansen’s vision for an arena in Sodo is a reality. The Sounders get their own stadium, shaped like half a soccer ball and gently turning – “because we can,” Mulder said. An unnamed ice hockey team also gets its own stadium.

An elevated bus lane connects the towers at mid-height, although the State Route 99 tunnel currently under construction is still in place. “All we have left are buses,” Mulder said, “and Priuses floating.”

Despite finite possibilities, the past is perhaps even more diverse than the future. The Master Builders Association built a spinning Pioneer Square with a burning fire in Seattle below. Another from Bailly & Bailly built the Seattle pillars below St. James Cathedral – before the dome collapsed – with a Seattle Metropolitans logo on one side. Apparently there are a lot of hockey fans in the room. 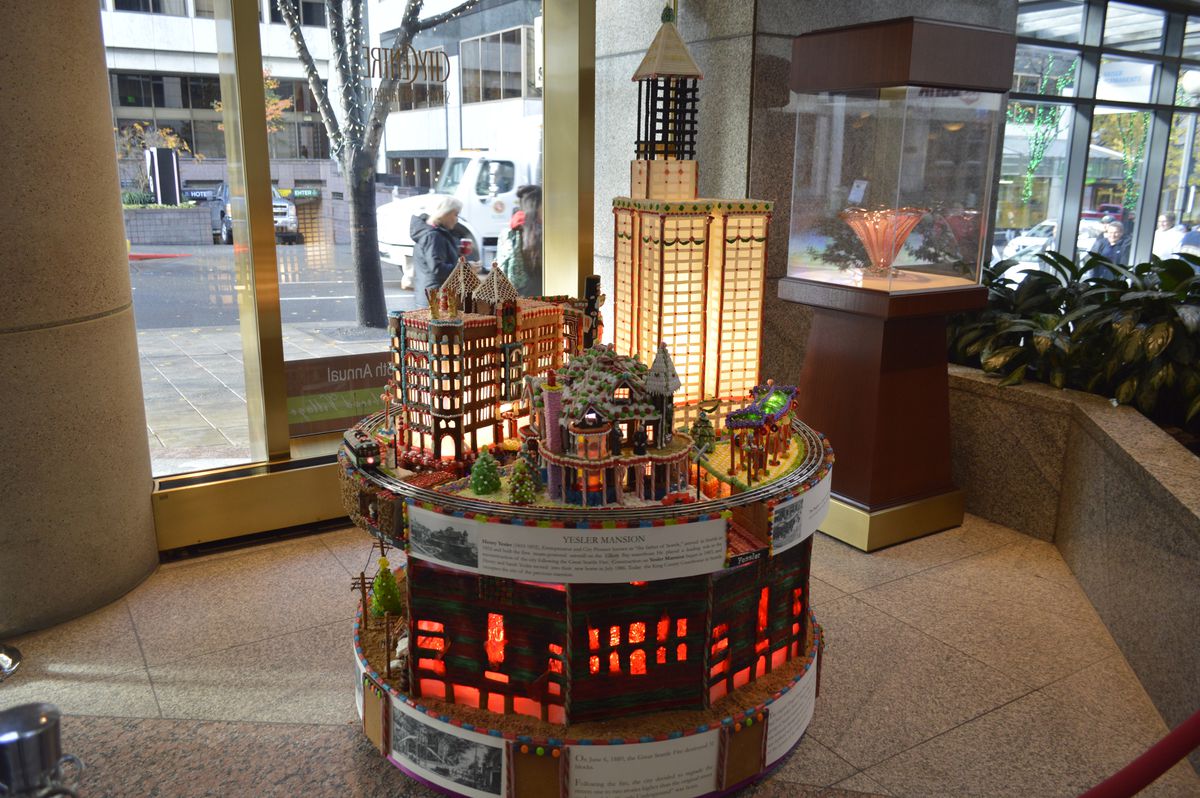 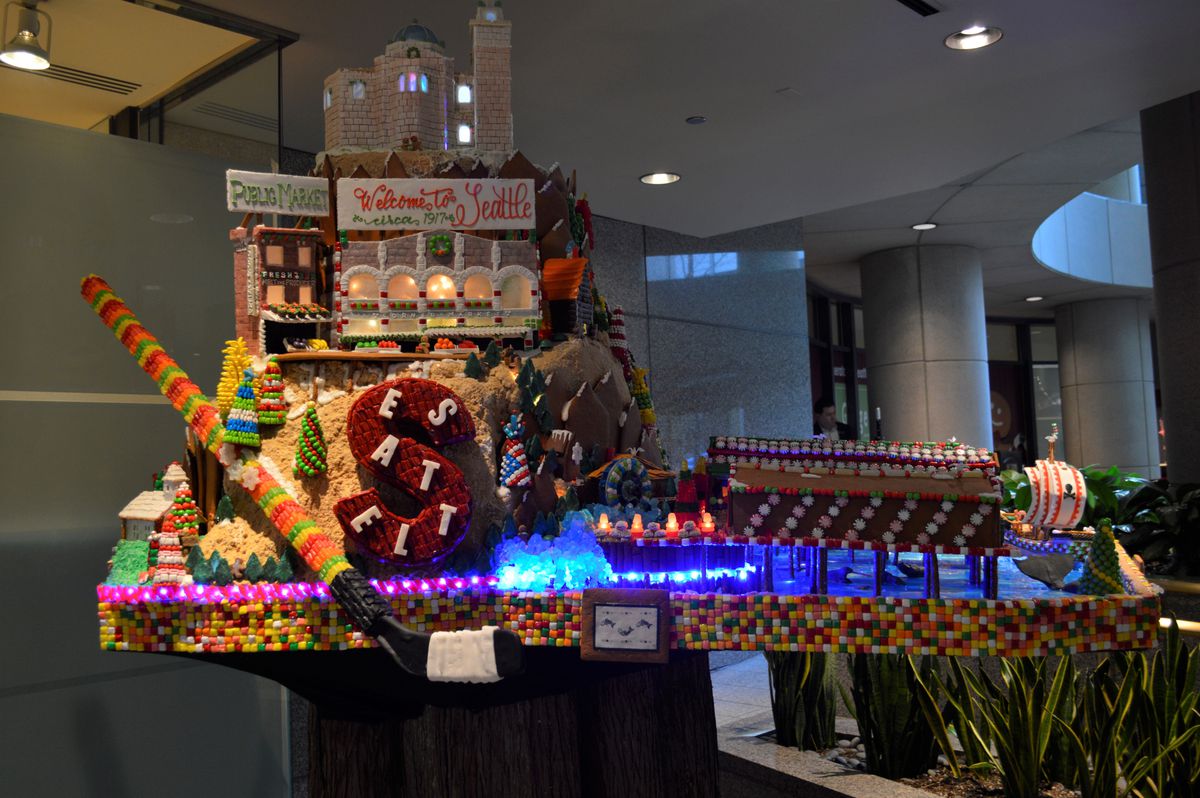 Left: The Master Builders Association retells the history of Pioneer Square. Right: Bailly & Bailly’s construction of the past.

Callison RTKLs are the most conceptual. Originally designed as a Fremont Troll with a Space Needle, the design was developed to be reminiscent of the old Ballard. The troll became a massive, sturdy fisherman in a blue-striped T-shirt and yellow jumpsuit with a red beard shouldering a boat. It emerges from a semicircle of sea walls, with a mechanical Hiram Chittenden lock at one end, crowned by half of Ballard Bridge. A seagull in a matching shirt flies overhead. 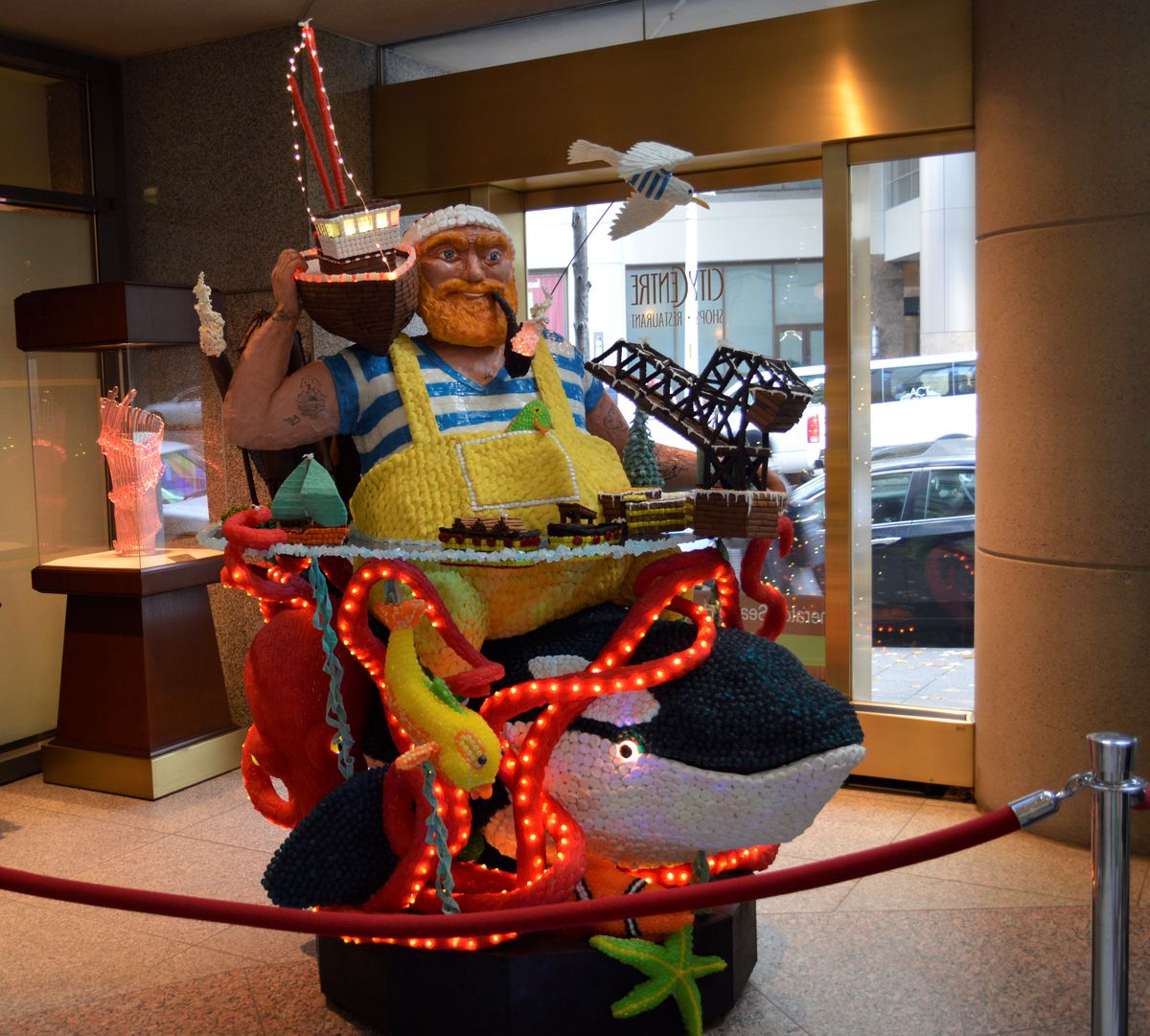 Callison RTKL’s captain on his Orca.

A fish peeks out of the front pocket of his overalls “in case he needs a snack or a friend,” said Michael Trenary, senior designer at Callison.

“We wanted to play with scaling and make nature the bigger element,” said Trenary of the design. Man-made elements such as locks and boats remain relatively small, while natural elements remain on the fisherman’s scale – an octopus that wraps around his leg, fish below the surface, the orca he uses as a steed.

“We really wanted it to be quirky and magical,” Trenary explained, “not really a literal retelling of the past.”

The basic structure consists of paper mache – and like all submissions in the Gingerbread Village, it is largely inedible. But most of the elements are visible. This octopus, wrapped in red Swedish fish, took about 300 hours to complete. The fisherman was molded from 20 pounds of fondant.

“It’s fun to have these amorphous shapes,” Trenary said, “but getting the full 360 degrees of each surface was really a challenge. But ultimately rewarding. “

The captain, the sodo stadiums and the remaining candy creations can be viewed at their new location in the city center until January 1st.

Your guide to summer 2021 outdoor theater and performances in the...

The Seattle Tower is a gorgeous exercise in Art Deco flamboyance

Seattle Architects Look For Designs, Materials That Sets Them Apart

In Seattle, Olson Kundig builds a net-zero ‘cabin in the city’